It is often more convenient to possess the ashes of great men than to possess the men themselves in their lifetime. But in Tony Elumelu’s case, the reality is remarkably different; Nigeria is extremely lucky to possess Elumelu. This is because the maverick banker elevates fiscal management and entrepreneurship to an art form, for the benefit of the country.

The excellence of his art however, lies in its intensity; Elumelu is specially gifted at taming the odds and making all disagreeable evaporate like mountain dew on grains of sand. And he does not have to force it; he simply faces challenges with courage, matchless equanimity  and devotion to beauty and truth.

Predictably, his ascent to the top was never a walk in the park. It required paying his dues and shunning the frivolous. Hence you would never find Elumelu concentrating on anything beyond business and philanthropy.

Yes, frequently likened to a champion and oftentimes, a business genius, Tony Elumelu effortlessly depicts the image of a modern day General of Commerce. Tony, among other things, projects a benevolent culture of industry and humanity. Through unparalleled modesty and hard work, he dispels the notion that entrepreneurial success constantly conflicts with excellent citizenship of humanity.

Mr. Chairman, as he is respectably called, also understands that to be a man of honour and substance requires indeterminate exploits at dawn through dusk in honest industry. He knows that honour and longevity, like celery, flourishes in the dark shade – far from the blaze of disconcerting neon lights.

However, being a symbol of African enterprising spirit of passion, unadulterated commitment, resilience and hardwork has not been without commensurate accolades.

No doubt, the recent appointment of four women into top executive and non-executive directorship positions in Transcorp underscores the predilection of Elumelu, Chairman, Heirs Holdings, the parent company of Transcorp, for identifying excellent female leaders and promoting them to important leadership positions.

Being the father of five beautiful girls is enough reason for Tony Elumelu, chairman of the UBA Group, to have a soft spot for women. But for one of Africa’s most successful entrepreneurs, it goes beyond that. In an era when companies are being forced to redress inequality within their teams, Elumelu has proved to be sensitive and serious about gender equality. And he is leading the charge of the few men giving women a shot at leadership positions.

Recently, the Transnational Corporation of Nigeria Plc, where Elumelu is also chairman, announced significant appointments to its board and executive management. Owen Omogiafo was appointed as President/Group Chief Executive Officer with effect from March 25, 2020. She will succeed Valentine Ozigbo, who is retiring to pursue a career in public service. Omogiafo is currently the MD/CEO of Transcorp Hotels Plc and has over two decades of corporate experience in organisational development, human capital management, banking, change management and hospitality.

Also appointed is Dupe Olusola as the MD/CEO of Transcorp Hotels Plc. Olusola is currently the Group Head, Marketing, at United Bank for Africa Plc and has over 21 years of corporate experience including being the former MD/CEO of Teragro Juice Concentrate Plant. Helen Iwuchukwu, currently the Group Company Secretary of Transcorp Plc, has been appointed as an Executive Director/Chief Operating Officer of the company.

Other appointments are; Christopher Ezeafulukwe, hitherto the Executive Director, Business Development and Legal, Transcorp Plc, as the MD/CEO of Transcorp Power Plant, Ughelli; and Okaima Ohizua as Executive Director/Chief Operating Officer of Transcorp Power Ltd. Elumelu was quoted as saying that he was confident that the newly appointed chief executives and non-executive directors would further strengthen Transcorp’s mission of improving lives across Nigeria.

However, these gender-sensitive appointments are not peculiar to just Transcorp. In UBA and other companies that Elumelu has controlling or considerable stakes, the story is the same. In UBA, women like Foluke K. Abdul-Razaq, Owanari Duke, Erelu Angela Adebayo and Angela Aneke serve as non-executive directors while Noellie Tiendrebeogo, Sarata Kone, Chioma Mang, Nkechi Arizor and Adesola Yomi-Ajayi serve as chief executive officer, UBA in Burkina Faso, Cote D’Ivoire, Gabon, Liberia and New York respectively.

At Africa Prudential, Mrs Eniola Fadayomi, MFR, serves as Chairman while Uzoamaka Oshogwe, is the Managing Director/CEO, Afriland Properties. Likewise, at Avon Healthcare Limited, Dr Awele Vivien Elumelu is the chairperson while Adesimbo Ukiri is the Chief Executive Officer. At the Tony Elumelu Foundation, the leading African philanthropy committed to empowering African entrepreneurs, Ifeyinwa Ugochukwu serves as CEO. Appointed in 2018, Ugochukwu is the first African to become the Chief Executive Officer of the Foundation.

According to Elumelu, “These appointments demonstrate our commitment to nurturing talent and rewarding success. We have a deep pool of highly qualified and dedicated employees, who can be challenged with more responsibility in attaining our corporate vision.

“We remain committed to diversity and inclusion; are delighted by the depth and quality of experience that this leadership team brings to our group. These appointments further indicate our internal succession capacity and strong corporate governance practices.”

5 PERSONS NABBED OVER KILLING OF POLICEMAN, VANDALISATION OF POLICE VAN BY IRATE MOB 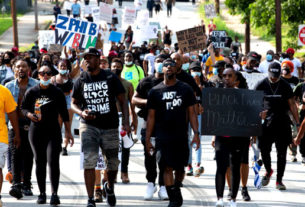 More Protests In US Over Police Killing Of Another Black Man.