Former United States Vice President and presidential candidate in November’s election, Joe Biden, has called on President Muhammadu Buhari to stop the killing of protesting Nigerians in the country.

Biden, who commiserated with victims of shootings by the military, said the government should embrace dialogue rather than killing protesters. He stated that the US will stand with peaceful protesters calling for the reform of the Nigeria Police Force.

He said, “I urge President Buhari and the Nigerian military to cease the violent crackdown on protesters in Nigeria, which has already resulted in several deaths. My heart goes out to all those who have lost a loved one in the violence.

“The United States must stand with Nigerians who are peacefully demonstrating for police reform and seeking an end to corruption in their democracy.

“I encourage the government to engage in a good-faith dialogue with civil society to address these long-standing grievances and work together for a more just and inclusive Nigeria.”

The violence that rocked #EndSARS protests across the country worsened on Tuesday with 43 protesters and six policemen losing their lives.

The army after killing the protesters carried their corpses to cover upthe genocidal act. 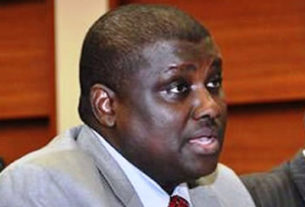 EFCC to Arraign Maina, Friday As He Forfeits 23 Properties to FG.