The Nigerian Police has described as unfounded the rumour that IPOB would disrupt 2019 election and urged the public to disregards rumours of threats by the Indigenous People of Biafra (IPOB) sit at home order in the Southeast for Presidential and National Assembly Election, warning that an attempt to disrupt the poll will be dealt withdrastically.

Deputy Inspector General of Police (DIGP) Investigation, Michael Anthony Ogbizi who gave the warning during a meeting with stakeholders and security personnel in Umuahia on Friday assured the public that necessary security measures have adequately provided to ensure a hitch free and peaceful election.

He urged the public especially electorate to disregard IPOB threats pointing out that security personnel have been drafted to all nooks and crannies of the voting centres to make sure that there well be massive turn out of people to vote their choice candidates.

He said the meeting was on the instance of the Inspector General of Police (IGP) Mohammed Adamu who considered it most appropriate to gather the stakeholders and security agents together in view of the nation’s general elections of February 16th/March 2nd 2019.

Ogbizi urged security personnel to show professionalism and never compromise in their duties as the nation and entire world now looking up to them at this critical period.

In their remarks Assistant Inspector General of Police (AIGP) Zone 9 Mr Wilson Inalegwu and commissioner of police Abia State Command Etim Ene Okon, said adequate arrangements have been made to ensure security personnel are at polling units by 5.30 AM ready for arrival of INEC officials.

According to them, there shall be two special security outfit, the static and mobile security police on handy to patrol the polling units while the other is to remain permanently at the polling units in-order to checkmate the entire process.

They assured the public that the police in-conjunction with civil defence, immigration, custom, FRSC, Prisons and NDLEA security personnel are there to ensure the needful.

Meanwhile members of various groups including IPAC, religious leaders and interest groups were in attendance during the meeting.

In a similar development Mr Nnamdi Nwannukwu, the Commandant, Nigerian Security and Civil Defence Corps in Abia, said that the command deployed 25,000 operatives to join other sister-security agencies for Saturday’s presidential and National Assembly polls in the state.

Nwannukwu said this in an interview with our reporter in Umuahia, the Abia capital, on Friday.

He said that the command had been part of the series of the Inter-Agencies Consultative Committee on Elections Security meetings to strategise and adopt measures for adequate security before, during and after the polls.

He said that the command was fully prepared for the general elections, adding that officers and men had been specially trained for the election duty.

Nwannukwu gave the assurance that there would be adequate security for the citizenry to exercise their franchise without any fear of molestation or intimidation.

He said that the security arrangements on ground would guarantee free, fair and credible elections devoid of rancour and violence.

The commandant appealed to parents to restrain their children and wards from engaging in acts capable of disrupting the peaceful conduct of the polls in the state.

He said, “Parents are by this medium advised to warn their children and wards to desist from acts capable of breaching the public peace during the general elections.”

He warned that any person caught involved in acts of violence during and after the elections would be made “to face the full wrath of the law.”

Nwannukwu assured law-abiding Abia residents of adequate security of their lives and property “before, during and after the elections. 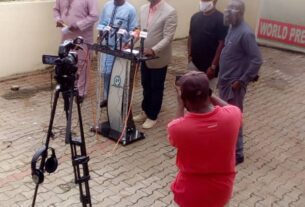