The Inter-Party Advisory Council, IPAC has elected a 9- man new national leadership to be led by Dr Leonard Nzenwa who has presided over the affairs of the Council in the last one year.
The new executive which emerged at an election after a general assembly meeting of political party leaders held in Abuja on Thursday, include:
National Chairman
Dr Leonard Nzenwa (AAC), Deputy National Chairman
Mrs Chinyere Oge Kalu (ZLP), National Secretary Alh. Yusuf Dantalle (APM), Deputy National Secretary
Mr Egbeola Martins (YPP), National Treasurer
Hon. Muhammad Lawal Nalado (Accord), National Financial Secretary
Dr Abdul Ahmed Ishaq (SDP),National Publicity Secretary
Ambassador Agbo Major (NNPP),National Organizing Secretary
Prince Chinedu Obi (NRM) and National Legal Adviser
Barr. Nnadi Uche (APP).
The electionwas observed by a four-man INEC team led by
Hauwa G. Habib.
The motion for the election of new executive was moved after Nzenwa gave account of his stewardship.
The election committee chairman, Chief Dan Nwanyanwu in his brief remarks said the election process was in compliance with the 2018 Code of Conduct, adding that the achievements of Nzenwa’s leadership were worthy of strengthening IPAC and bringing all the 18 registered political parties to work in harmony.
The election was conducted under a rancour free atmosphere in the conference hall of the electoral institute, Abuja.
In his acceptance speech, the chairman, urged all leaders of the 18 registered political parties to work together “to rebuild our country”. According to Nzenwa, he is willing to work collectively with other leaders of political parties in the general interest of Nigerian people.
“The #EndSARS Protests is a wake up call for all of us”. He stated. 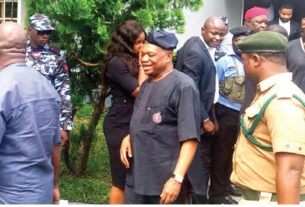